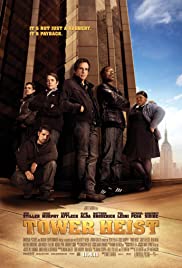 Manager of a high-rise condo, Josh Kovaks has a good relationship with the tenants; especially financier Arthur Shaw. When Shaw is arrested for fraud. Josh thinks it's a misunderstanding that can be solved, but later learns that the employee pension fund, which he asked Shaw to run, is gone. When one of the employees attempts suicide, Josh's opinion of Shaw changes. He goes to see it and loses his temper, and it works for him. An FBI agent tells him that Shaw could just walk and that it is unlikely that he will recover the fund. She tells him that Shaw is rumored to have $ 20 million lying around if he needs it in a hurry. Josh thinks he knows where he is. Josh, along with 2 other employees (laid off), a tenant (n evicted) and an acquaintance (criminal), set out to break into Shaw's and get the money.