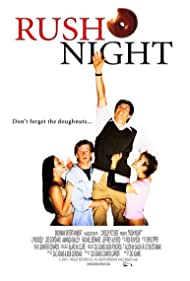 Jimmy and Kevin are two frustrated college-age dorks. They don't get into parties, they don't get into clubs, and they definitely don't get chicks. But, one day, they figure out that the way to be cool and get chicks is to join a fraternity. Of course, no fraternity would take these nerds, so instead, they do the next best thing; they pose as frat guys, and crash a fraternity party. There, they meet two hot girls who seem to fall for their act. The girls explain that they've had too much to smoke and have the "munchies" for chocolate doughnuts. The guys are convinced that sexual favors will be their reward. Simple right? Not for this group. They quickly realize that Karma is a harsh mistress for those with impure motives as their mission turns into a comedic spiral into the Twilight Zone.